Skip to content
Previous Next
Solar Battery vs. Whole Home Generator—Which is Right for Me?

Solar Battery vs. Whole Home Generator—Which is Right for Me?

There is no shortage of reasons why Arizona homeowners are looking to gain greater energy independence. From preventing power outages, to reducing reliance on the grid, avoiding peak demand charging, to just simply having control of your own energy whether fully off-grid or grid-tied with behind-the-meter power generation.

For backup power in times of a power outage, many homeowners right here in the greater Phoenix area need access to life-saving electronic medical equipment or consistent refrigeration for medications. Some homeowners prefer to keep a backup power option to run necessary safety equipment or home essentials, like a well pump or security system, and some homeowners don’t want to say goodbye to all the food in their freezer every time the power goes out.

Whatever your reason for needing an independent backup solution for your home electricity, you likely find yourself at the crossroads of choosing between a whole-home generator vs a solar battery backup system.

Each type of system has its pros and cons—here is what the solar installation experts at SouthFace Solar want you to know about choosing between battery-assisted solar power or a generator.

If you’ve ever heard a low hum coming from a neighbor’s house when the power goes out, you were likely hearing the hum of a backup generator. These are combustion-based generators that provide electricity by burning a fossil fuel like natural gas or propane. Backup generators can be designed to turn on automatically when an outage is detected, or manually turned on when needed. The cost of backup generator installation depends on how large your home is and what kind of appliances you would like to keep operational during an outage.

The Benefits of a Whole-Home Backup Generator:

While backup generators are a popular choice for backup power, there are some drawbacks to using this type of system. They can be particularly noisy (if you related to hearing the low hum, you understand!), they require regular maintenance and will incur gas costs, even if you don’t need to use them, and they burn fossil fuels that create harmful carbon emissions. 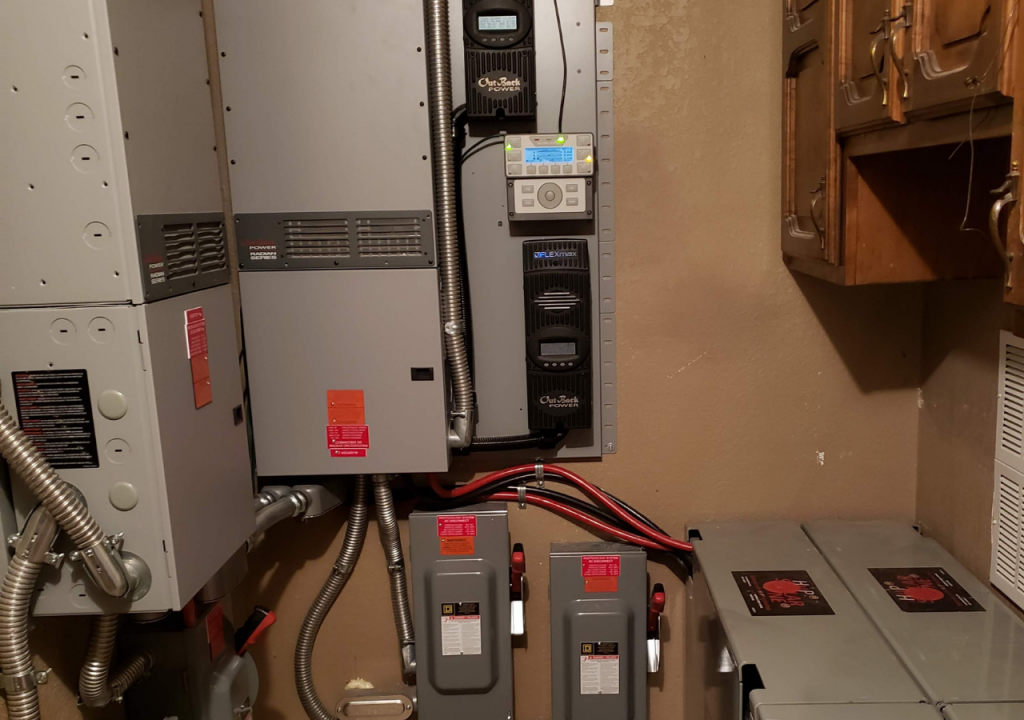 Solar battery backup, also known as solar battery storage, is a battery that can store and disperse the renewable electricity generated by solar panels. You may have heard about solar battery products like the Tesla solar battery, Tesla Powerwall.  A solar battery system is best combined with a new or existing system of solar PV panels and an inverter, and can be designed to operate in conjunction with the electrical grid or independent of the grid. These are called on-grid and off-grid systems, respectively.  Batteries can also be used without solar but will need to be charged by an energy source like from the electricity grid.

Home solar battery storage ensures that your home uses as much of the renewable electricity coming from your solar panels as possible, and can be used during times of low solar output (like at night), during an outage, or to avoid times where electricity is more expensive (like time-of-use/peak demand charing programs).

The Benefits of Solar Battery Backup

What’s the drawback? If you pair solar with a solar battery, you’ll have power as long as the sun is shining but what happens if you need that backup power during a cloudy week? Depending on your backup power requirements, a generator may be the better option. Also,  solar battery prices will always vary, depending on the size of your system and what kind of solar panel battery storage system best meets the needs of you and your home. While solar battery storage system costs are higher than a backup generator, battery storage can also qualify for valuable solar incentives like tax credit savings and be used for offsetting peak demand rates.

Choosing What’s Right for You

So, which option is going to be best for your home? If you have no plans to install solar in the future and are only looking to keep your essential appliances up and running during an emergency situation, a backup generator may be the most appropriate option.

If you are looking to keep the lights on during an outage, reduce the peak electricity charges from time-of-use rates, or already have an existing solar PV system, a solar battery backup system will likely be the best option for your home.

Get help designing the future of your home energy with a free solar consultation. Call SouthFace Solar to schedule your quote today, at 480-405-6105 or get in touch here.